In the spring of 1940, the German Wehrmacht takes the offensive in the West as well. Holland and Belgium are overrun, the English are chased across the Channel, and six weeks after the start of the campaign France has capitulated.[1] 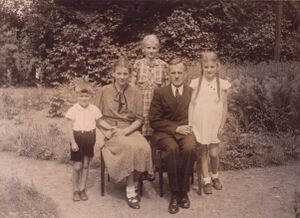 Lilly Hitzemann with husband Fritz, 1928–1947 parson of Zechlin-Flecken, and their children[2]

Once again I spend three unforgettable weeks of vacation in Zechlin-Flecken in the middle of the landscape of my beloved Margraviate of Brandenburg rich in forests and lakes. Soothing silence lies over the old hunting lodge where I live.[3] At the beginning as the only guest, later with two others (mother and little daughter), we are motherly cared for by the kind landlady, the protestant pastor's wife. I enjoy the vacation pleasures with the young wife Lotte and often together with the little daughter. Most of the day we lie on the water or on the shore of one of the lakes, sometimes deep into the night. Often we take smaller or bigger trips in a white boat, which probably belongs to the parsonage. We paddle across the quiet lakes and through the narrow channels that connect the waters. The boat glides almost silently past the whispering reed belt, from whose thicket the whistling and quarreling of waterfowl emerges. Quietly gurgling, the water beats against the boat. The warm summer air lies calm and still. Everything breathes deep peace. Even the nights are warm, and then sometimes the old lodge is haunted. The wooden stairs creak, and a door squeaks softly. The young woman is a bit worried about it, but it doesn't bother anyone else. Who should sneak through the house at night? And why?

One day a fighter plane is circling in the sky. I feel a slight uneasiness. The one up there has a task. He flies for Germany. But I make myself comfortable days down here. And while German men bleed at the front, I enjoy the sweet life at home.

A few days after this vacation I am back on the water. This time it is the Wannsee, and the boat is blue. It belongs to Lotte, my vacation partner in Zechlin-Flecken, or rather her husband, a Senior Government Advisor, and again a fighting machine is chasing through the blue sky to Gatow. Now I'm fed up with it, the next day I drive to the regional command to finally reach my draft. This cleares up an unbelievable mistake: In my papers, which are in the recruitment command in Neukölln, there is the note: "Conscripted on 1st September 1939". But I never received a draft, although I had called the recruitment command several times since the beginning of the war. This time I am more successful. Three days later I have my draft notice (induction order) in my hands. But now that the time has come and I read the cool, concise order, I feel a slight regret for my hasty action. But I have wanted it that way.

I cannot really say exactly what drove me to volunteer for military service. It was not a reasonable consideration, but rather a natural urge to experience things, just as I had earlier been driven to seafaring,[4] it was probably also the fear of not having participated in the victorious war (after the initial blitz victories, one could probably expect an ultimate victory) and standing next to my war-experienced colleagues without war awards. A mixture of vanity and sense of duty. Perhaps also a feeling that I would like to express - somewhat presumptuously - in Diotima's words, with which she sent Hyperion to war: "Your full soul commands you. Not to follow it often leads to ruin. To follow it, probably also. Best you go, for it is greater."[5]