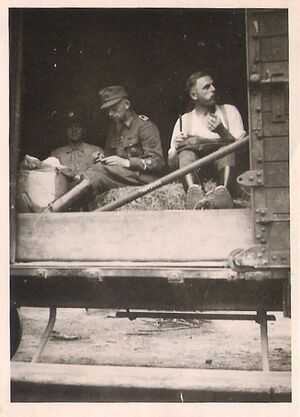 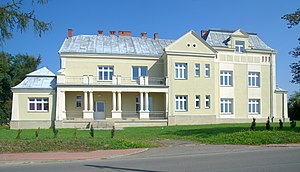 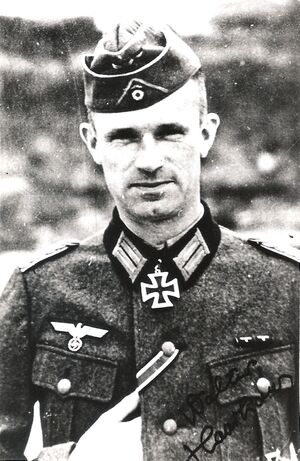 The train rattles through the night. It is packed with soldiers. We have found room in a freight wagon. I'm sitting on my luggage, head supported in my hand, and looking out through the open sliding door into the dark night. Through the windows of the illuminated passenger wagons the light penetrates only a few metres into the darkness, and in the pale twilight I see the brown land slantingly below me like lines whizzing by. But behind it is darkness. This landscape seems treacherous and dangerous to me. We are moving through enemy territory! In the morning (05.10.1940) we arrive in Korczyna and report to the battalion commander Major Haarhaus[2]. We are now two left: Sergeant Franz Bachem and me. Standing quite correctly abreast, in service uniforms with steel helmets and gloves, we wait in the vestibule of the small castle for the appearance of the commander. Then he stands before us, slim and distinguished, with a narrow face and narrow lips. A soldierly appearance, aloof and a little too cold. "Describe your military career!" We buzz down our litany, first Franz Bachem smooth and eloquent, then me somewhat faltering. The Major asks a few more short questions and we are released.

We are transferred to the 4th company of Infantry Regiment 477 which is located in Kombornia. A vehicle of this company is expected today and should take us in the evening. So we are enjoying spare time strolling through the small village. At the edge of the village we meet a modest Polish funeral procession, which we let pass, saluting. Then we follow a dirt road that goes up the slope and lie down in the grass at the top.

After the night travelled through for 30 hours without sleep, I am tired and listless. Our troops have now occupied several European countries. I would have liked to go anywhere but Galicia, which in our imagination is always associated with Jews, dirt and a lack of civilisation. And now I have to end up down here, of all places! Far from everything I cling to. Alone in an environment that resists me inwardly. I feel that I am a sedentary nature, with a pronounced persistence. And so I'm seeing the last piece of home in Franz Bachem. But he has long since settled into his new environment with Rhenish light-heartedness. Moreover, the Major was not entirely unfamiliar with the Bachem family, and so he had at least subliminally found a certain relationship with his homeland. I have a bit of a blues.

Evening has come and the vehicle is there. A horse and cart, of course, as befits a horse-drawn unit. We ascend and the last stage of our long journey begins. The horses are going slowly and the way is long. It has long since become dark, and a wonderfully starry night sky arches above us. Already two hours we twitch through the darkness. Seldom does anyone speak a word. The muffled stamping of the horses' hooves and the clattering of the harness is only interrupted now and then by the snorting of the horses. But then suddenly numerous tiny dots of light flash up in the distance. The village! Peace and security emanate from these little golden yellow dots. It is a joyful feeling to see, after long and tiring ways through darkness and foreign land, the shining goal that promises warmth and human closeness. 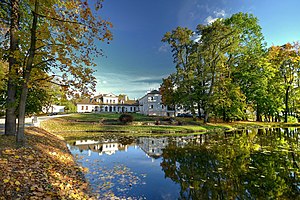 We descend in front of a small castle. Castles of this kind are quite numerous in Poland. They are the seats of the Polish landed gentry, and they correspond to the mansions of our East German landowners. This one is still inhabited by the very snappy mistress, but it also serves as the company chief's quarters. We enter the living room. The company chief, Captain Goßmann, is sitting at a table by a petroleum lamp. He is already a little older. His open smile and the friendly words with which he greets us immediately create an atmosphere of sympathy and trust.