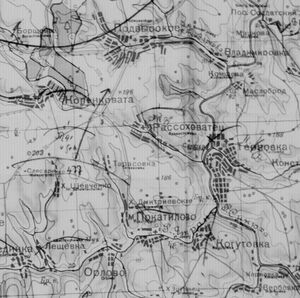 At dawn on the 5th of August, the battalion leaves the village, gradually unfolds and goes into action. Captain Goßmann appears. He now leads the battalion. Our company is located in a grassy hollow[2]. The command to entrench goes from mouth to mouth. But before we have finished our skirmisher’s trenches, it says “Battalion march!” 10:30 o’clock.[3] The attack begins. In the shelter of the hollow, we reach the height and thus the gardens and fields of the village up there[4]. Corporal Mielenz, who is near me, takes his submachine gun from the shoulder and holds it in his hands ready to fire. In front of us is a cornfield, and under the waves of the gently swaying stalks deadly danger through hidden shooters is lurking. In a broad front we comb through the hip-high grain field. The first shots are falling. My platoon roams on the edge of the village. On the dirt road behind the last house, next to a shrubbery, lies a fallen red army soldier. I stop for a moment. The first dead opponent!

From the height[5] we look back down into a shallow depression. Three hundred meters ahead of us earthy brown shapes scurry away between cornfield and a turnip field. I’m calling for a MG, but Mielenz says the few people are not a worthy target for a heavy MG. Some shots whip over to the Ivans. They duck even deeper and disappear in a sun flower field. The fire increases. The advanced Soviet protection groups retreat, fighting. Not everyone succeeds. Many a fleeing Red Army soldier is stroken down by a bullet of our infantry. This attack is downright scary. Almost silently, the loose waves of our infantry move forward. Without hurray, without shouting. Only now and then a command, a communicating call. Single shots fall. Our soldiers go forward like hunters in a hunt, step by step, the rifle at the ready, attentive, upright, unstoppable.

Behind me, a grenade crashes, and I turn around as fast as lightning. I see the body of a Russian flying half a metre above the ground and fall down again. He was wounded and could no longer escape from us. As we approached, he put a hand grenade under his body and pulled it off.

As we move on, an Ivan emerges from the grass thirty metres in front of me. He rests on the elbow and raises an arm. Next to him is a second one. I urge them to raise both hands, because with the devious fighting style of the Red we have to await insidious surprises. But the two Bolsheviks do not change their attitude. Two German soldiers also get in touch with the two. We approach them from two sides. They are really wounded. We’ll leave them to our paramedics.

The defensive fire of the Soviets is intensifying. We come across their main line of defense. Now we move by leap, creep forward in trenches or crawl through the tall grass. I pass one of our NCOs. He lies dead in a ditch. We move a bit closer to the Soviets, but then we are stuck. The Russians fight back with the courage of despair. Their heavy weapons are destroyed or have shot off their ammunition. They only fight with their rifles, and they shoot damn well! Since they are excellently camouflaged, none of them can be seen. Since we have the bad luck to attack against the sun, we are blinded. So it came that in some places we almost dropped in it and lie close to their position. Now we get fire from very close range and cannot see anything ourselves.

I lie in the high grass and search the forefield in vain. These earth-brown uniforms of the Red Army soldiers are an excellent protective color in the brown grass. I hope that one of them once in a while reveals himself by a movement or lifting the gun barrel – nothing! Besides, I want to go to my MGs. In the impetuous action they came into the front line and are now fixed there. They must not bestir themselves because with the heavy equipment, they are a worthwhile and easy target.

A few metres to the right behind me, one of my men suddenly stands up and sits on the edge of his skirmisher’s trench (who could, of course, had dug himself into the ground). I snarl at him for this imprudence. But I can already see that the red blood trickles from his temple. Headshot. When the shock is over, he begins to moan softly. I send him to the rear and he crawls backward.

As soon as he is gone, a bright, piercing scream of pain tears the shimmering-hot summer air. That was to my left, about ten metres away. But before I can do something, it groans loudly behind me. Another hit! They shoot us off like the rabbits. But I have to go to my MGs. They must be diagonally right in front of me. There, one had shot earlier. I shout a couple of times. This is, of course, madness, in this situation. I get no answer, otherwise they would reveal themselves and get it in the neck. There I see a movement in front of me in the grass. A steel helmet appears. But it is a man from the neighboring company. He is wounded and crawls backward.

If only it would get dark! I seem to be the only unwounded in the whole area. Strange: The screams of pain of the hit comrades move me, but it hardly comes to my mind that I myself could be hit, too. I do not feel any fear.

Death is going round. His terrible scythe never hissed past me as near as today. But never in my life have I felt the closeness of God so intensely - if only in the subconscious - as in these hours of greatest need. I believe that this boundless trust, this awareness of the security of God gives me the fearlessness of death. But surely it is also because my thoughts have to focus on the combat mission and there is no room for other things. It may also be due to my nature. Someone once said to me that I was „of a slowly excitable mind“, nothing shocks me so fast. Anyway, you cannot explain everything. There are things that are just inexplicable. But a thought crystallizes in my brain as I crawl around here: Should I get out of this battle, then God has given me the life for the second time. And in gratitude, I want to follow His commandments more than ever.

I crawl back and forth to connect and gain an overview of the situation. There’s another one lying! But that’s not how a person with alert senses would lie. According to his attitude he is unconscious. I crawl to him and am puzzled by so much nerves and outraged by so little combative spirit: The guy is down! He fell asleep calmly in the middle of the battle. He is overtired.

A command is given: Carefully disengage at dusk. This is not a good command. It came too early. The sun had finally set, but it was still bright. The Landsers can’t wait and begin to crawl back. Some think it too slow. They stand up and jump back in short leaps, occasionally throwing themselves down because they are being shot at. The field comes to life, and I am astonished to see how many are still alive. Now nobody wants to be the last, and soon the backward movement is in full swing. As the Russians recognize our retreat, their gunfire swells and accelerates our defecting movement.

A soldier lying wounded in the grass had been overlooked on his way back. He gets hit by a bullet for the second time and lets out a shrill, desperate cry of pain. But we had already gone back about a hundred meters. Two men of the rifle company recognised their groupmate by his voice. They undertake to bring him back if we give them protective fire. There I let my MGs get in position, and under their rattling rain of bullets which force the Soviets to take cover, the two rush back toward the enemy a hundred metres, grab their comrade and haul him back.

This is exemplary camaraderie. After this murderous, failed, demoralising attack, everyone was glad to have come out unscathed. Then two men are offering to run into the Soviet fire again at the risk of their lives to save a wounded comrade. They risk their own lives to save their comrade’s life. That’s true soldier-like heroism and genuine Christian charity.

Our attack is rejected. We withdraw with losses that were the heaviest of the campaign so far. Our company lost 7 dead and 24 wounded. That is almost 20%. And that’s what the Russian has achieved with well-aimed rifle fire only. However, we had attacked without any artillery support. The Russian is a tough fighter. Add to that the fact that he is encircled and fights for life and freedom like a wild animal with the courage of desperation. There were many – we have seen it more than once – who would rather commit suicide than surrender. Certainly, this behaviour is also influenced by the propaganda of the politruks who painted the German captivity as hell and threatened them with all possible reprisals. But it is also the hard, stubborn, death-defying will of the patriotic Russian to resist.

The blame for our losses also lies on the senseless use of our heavy MG platoons in the front line. The impetuous, carefree, almost careless forward urge has driven our MG groups to the very forefront. There they were now ahead and with their heavy equipment offered a magnificent target to the enemy. Had they remained in the second line as it should be, they would have been able to effectively support the advancing infantry with their mighty firepower, as a substitute for the missing artillery, so to speak.

Prisoners we made later testified that after our attack in the evening they were at the end of their strength and ready to surrender. But when they saw that we retreated they had regained their courage and decided to continue fighting. Our battalion commander got a big rocket from above because of his – at that, awkward, – retreat order.

We retire to the edge of a bush forest where we muster up first. We notice that the Russians are moving up. They take the chance to expand the encircling ring or eventually break out. In the meantime it has become dark. Occasionally soldiers are still coming back. One of our NCOs lost his orientation at dusk. He had encountered a marching column and had addressed the last man without receiving an answer. When he looked more closely, he realized that they were Russians. Then he struck himself sideways into the darkness.

The night is cool. Shivering, I have wrapped myself in my shelter section and lie between the comrades in a ditch at the edge of the forest. Once an alarm arouses us. The Russians are coming! We scramble up. Weapons and devices clatter. We listen eagerly to the darkness. But everything stays calm and we lay down again. But I cannot sleep, it’s too cold.