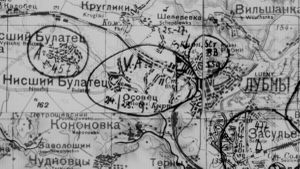 We move on, but now turn east and reach Lubny. In this town we spend the night in the basement of the prison. The next day we stroll through the town, cross the railway tracks and enter a row of houses at some distance from the railway line. Railwaymen live here. We "scrounge" some potatoes and bake potato pancakes in a kitchen. The housewife gets one too.

I now belong to a detachment of the leader reserve, which is subordinate to an advance detachment. The task of these advance detachments is to push far into the enemy's rear, regardless of whether the enemy is on the left or on the right, to disrupt their rear connections and cause confusion. Sometimes they are also given special missions, e.g. to dig out enemy staffs, to secure bridges before the enemy can blow them up, etc. Our task is only to stay on the heels of the enemy who is fleeing all too quickly.[2] The Wehrmacht, after all, has far too few motorised units apart from the panzer corps, while the Russian is much faster thanks to the masses of American trucks supplied. Our advance detachment is a battalion-sized, heavily armed, fully motorised unit that pursues the fleeing enemy in forced marches. We are secured by a group of motorcyclists riding or standing on parallel roads or paths. Others ride ahead to reconnoitre the terrain. One of them comes across a lorry full of Russians. Both are so startled that they speed off in opposite directions.