The next morning, the smiling sun is in the sky again, and the midsummer warmth dries the clothes quickly. 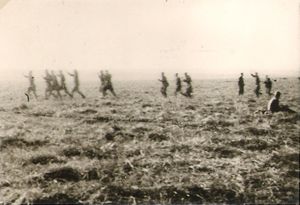 Suddenly a shout, half surprise, half warning. Instinctively I turn my eyes to the front. There I see brown figures emerging from the forest. At first they are individuals, but soon they seep out of the forest in groups and dense clusters, and then a broad stream pours across the grain field towards our positions.[1] They are unarmed and walk very slowly. Now the first have reached our positions and raise their arms. We let them line up right behind our position, because they have to be registered. After members of the battalion and regimental staff had arrived with a table and chair, the time-consuming process of recording their personal details begins. The Ivans came without weapons and luggage. They left everything behind in the forest. Among them are representatives of all the peoples of the Soviet Union. I take a tarpaulin from one of them and the belt from another. The pistol I had recently taken from the captain is already on my belt. It is a revolver.

There we get another surprise. The house on the right below our position at the foot of the slope was only one of several. The others were hidden by a dense group of trees. Besides, it was not empty, because in this small group of houses it comes alive. Throngs of Russians spill out. I can't believe how many people such a small house can hold. The Ivans step up and march in strict order directly towards our table. 500 weaponless Red Army soldiers. They've been stuck in the bulging houses under our noses for a day and a night, and we haven't noticed. No one had thought to check the houses.

During the registration procedure, a mounted man from the neighbouring division[2] suddenly gallops towards the stream of prisoners, which is still coming, albeit more sparsely, from the forest across the grain field. He now diverts the stream and leads it towards his own positions. The neighbour also wants to shine with the highest possible prisoner numbers!

The Cauldron Battle of Uman is over. The divisional order issued later gives the following figures: 103,000 prisoners, 1,500 captured guns, 700 tanks, countless infantry weapons and an incalculable amount of war material and equipment. 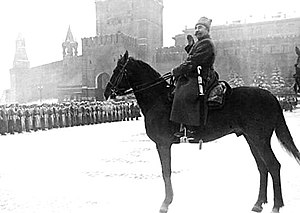 Marshal of the Soviet Union Budjonny (1883-1973), defeated in the Cauldron Battle of Uman, on 07.11.1941 as commander of the military parade on Red Square in Moscow

The clearing out of the cauldron and the sifting of the loot was taken over by other units. But we had already taken a large number of loot horses that were running all over the forest. They came from the cavalry divisions of Equestrian General Budjonny, destroyed in the cauldron. As leader of the Soviet army group here in the south, he was our opponent. Budjonny's army is annihilated.[3]

Further Advance and Fighting in Summer 1941 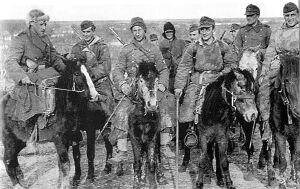 Many of the men in my platoon had caught one of the grazing Panje horses. The horses are smaller than ours, but very tough, persistent and very frugal. The Russians had simply left them to themselves. My men now put their sleeping blankets on the horses as they marched off, swung themselves into this makeshift saddle and rode off, glad that they no longer had to walk. But the number of these amateur riders is getting smaller every day. Partly because the best horses had to be given to the veterinary company, partly because the men had ridden themselves sore. After all, riding has to be learned.

In addition to the “private horse owners”, the company had also provided itself with horses and the accompanying farmer's carts, so that now quite a number of farmer's vehicles go along in our column.

On the way, the nagging greybeard comes riding up to me and explains that he has a change in mind for me. I hear that he would have preferred to demote me to half-platoon leader, but of course he couldn't get away with it.

We are now mounted again. We are those who are entitled to a riding horse in a manned unit, namely company, platoon and half-platoon leaders, Spieß and fodder master. The riding horses have become free again after our active horses have been relieved by the Panje teams. We don't have to worry about food with the horses. After the march they are unharnessed and taken to the meadow where they look for their food on their own.