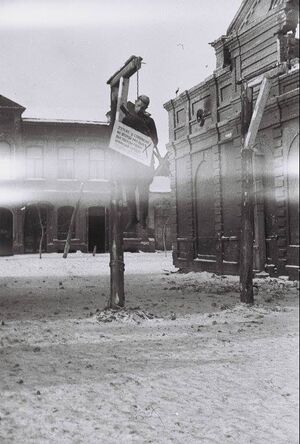 Photo of the mentioned gallows. The executed man carries a sign reading “29 Nov 41 A second time a German soldier was wounded by a shot in Slavyansk [rest illegible]” (source: Форум газеты ПОИСК)[3]

29 Nov 1941 or later. A gallows is erected in the market square, from which a partisan hangs. Moved by the breeze, the lifeless body rocks quietly back and forth. The dead man's face is calm, his lips are pinched together. His rifle has been slung around him, with the butt pointing upwards. A sign hangs on his chest stating the reason for his execution. The passing civilians look up indifferently or not at all at the hanged man.[4]

Not only our men are starving, but also our horses. This is bad, because the animals, overstrained by the hardships of the advance, especially in the last phase, are very weakened. Now they are starting to nibble at the wooden cots and beams. One by one they have to be put down, especially our active (German) horses. For the drivers, these emergency slaughters were a welcome boost to the damn scarce rations, but they ate these extra rations with one laughing and one crying eye, because many of our drivers were farmers and the horses had grown close to their hearts. All in all, the losses are still bearable, for we had almost doubled our horse inventory after the battle of Uman through loot horses, and the tough little Panje horses are still holding out.

I can't help thinking of our old nagging boss who used to give us such a hard time about feeding when we were on the advance. He had been relieved soon after the battle of Uman and appointed regimental feed master. This had given him a position suited to his inclinations and abilities. Lieutenant Herzog had then taken over the command of the company, but in the meantime he had already been replaced by another commander: First Lieutenant Jablonski with an unsympathetic gallows bird face. Former twelve-rounder. Recently he started a big party on the occasion of his birthday, which he then wanted to have paid for out of the company kitty. He's off to a good start!