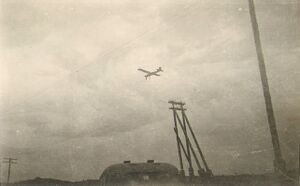 The General Officer Commanding[1] Hoth appears with a Fieseler “Storch” (stork) here at the focal point of the fighting.[2] Small, wiry, quiet, he stands with some senior officers in a meadow next to his Stork (a light, two-seat high-wing monoplane). I suspect that here, at the last favourable defensive line before the Donez, the Russian wants to halt the German advance to cover the retreat of his troops across the Donez.

After three days, the Soviets’ resistance is broken. We move up and enter Krasnopawlowka. A village like all the others. I lie with a sergeant in the house of a Turk. He has married a Ukrainian woman. His children all have Turkish names. The man is very friendly, but he complains bitterly to me that our soldiers have looted his beehives and in doing so destroyed them. “Why do the soldiers do such a thing? They can come to me. I'll give them all the honey I have, but surely they shouldn't destroy the bee colonies!” I completely agree with him. This is worse than stupidity. This is vandalism that damages our reputation. It should be punished, but who cares about such trifles in war?! His wife, like the husband no longer quite young, is a bit roundish and friendly. She is always ready to fulfil our wishes. But she too still has wishes.