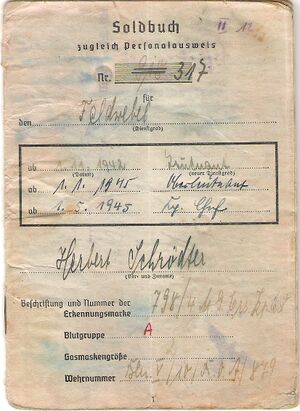 From the corps we reached our battalion on 16 May. There was great laughter when I arrived. With my breeches without riding leathers and my worn-out shoes without laces, I must have looked really funny. At least I was able to bring our Adju Bartenwerffer the pleasing news from the corps that he had been promoted to first lieutenant. A few days later I was appointed company chief with effect from 1 May 45.[1]

More and more Landsers get themselves a branch or truncheon to use as a walking stick on the march. Soon every second soldier has such a stick. But for the cautious and suspicious Ivan, this is getting scary. He orders the truncheons to be thrown away. Many of them had already been decorated with beautiful carvings.

We camp in our tents mostly on large meadows. Gradually we begin to surround these open spaces with barbed wire fences. The Russian explains to us that later Strafnikis (Soviet punishment battalions), SS members and Lithuanians would come in here. When everything was ready, we stayed inside ourselves. We nicely and obediently built our own prison. That devious Ivan sure had the stupid Gullible Fritz fooled!

I ran a festering blister under my heel, which our battalion surgeon cut open. Since then I've been travelling along on our vehicles.