17 Apr 46. After almost a year in captivity, I receive the first mail from home. My little daughter Barbara is dead, my brother missing, everything lost. But my parents, my wife and her two sons are still alive. My first sign of life had arrived home on 24 September 45 - 5 months after the surrender. It was a greeting scribbled on a piece of paper that a sick returnee had smuggled all the way from Riga. 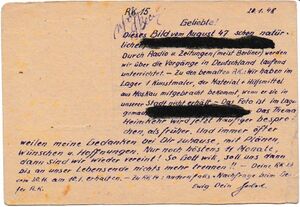 A censored Red Cross postcard from Soviet captivity, with which the author sent another photo to his wife, probably that of July 1947.[1]

Food is abruptly improving. The soup is so thick and dry that many cannot eat it. After 10 days, radically worse again: only 800 calories. - Very sparse news from home, as there is heavy censorship due to growing East-West tensions. Nothing at all is said about prisoners of war and the return home. Rumours and latrine slogans are flourishing all the more. The Ivan sees sabotage and anti-Bolshevik propaganda in all the rumours, most of which are unfavourable to him. He could prevent it by a better news supply, but that again is not possible, because then his shabby behaviour would become obvious. So the Iron Curtain remains. This is the method he knows best. - The only authentic news comes with the Red Cross cards from home, but even these are censored. It is astonishing that the text of the post is interpreted differently. Everybody has different opinions and hopes, so everybody reads out of the news only what confirms his opinion or hope. Of course, we only get newspapers from the Soviet-occupied zone, and they only bring good things from the East and bad things from the West. The only frightening thing is that there are so many stupid people who take everything printed at face value. The stupid truly do not die out.