19 Apr 46 Good Friday. - We have a prime specimen of a timeserver among us: the former Luftwaffe lieutenant Mahnkopf from Hamburg - until the end of the war he was an officer for Nazi indoctrination (NS-Führungsoffizier) and while still on the march into captivity offered a comrade a slap in the face when the latter remarked: 'It is Hitler we have to thank for that!' Today Mahnkopf is an Antifa member and an informer in Russian service, snooping around and insulting his former officer comrades as prolongers of the war! Since he is under Russian protection, we cannot do anything against him.

The Russian has allowed again that we can give lectures about our professional life or other professional lectures. I also give French lessons. After one such lesson, a young arty lieutenant comes to me. He is a former pupil of mine from the Schlüter School in Charlottenburg.[1] He recognised me by my voice and some of my typical lecturing gestures.

The distribution of cold rations is always an act of silent, dramatic tension. The bread, for example, is delivered in half loaves and has to be cut into equal pieces for the members of the food group (8-10 men). The distributor has been elected by the group as a trusted person, but is nevertheless surrounded, during the distribution, by the group who follow his work with suspicious eyes.[2] Nevertheless, some distributors try to cheat, which sometimes leads to grotesque situations. Some groups have built small scales that are also used to weigh fish and sugar. Despite all this, there are often arguments, and the distributors change several times. I too was a distributor, and since I was never so greedy and always distributed absolutely fairly, I have always been a distributor for a long time here and in other camps. 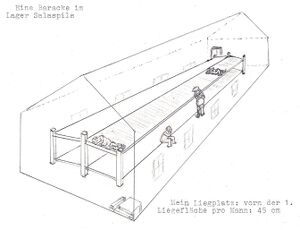 A barrack in camp Salaspils
My berth: in front, the 1st
Berthing space per man: 45 cm

Our banks are 2-storeyed and consist of a layer of boards running through the whole barrack, on which 45 cm of lying space is provided for each man.[3] When lying on our sides with our knees slightly drawn up, our knees almost bump into the backs of the knees of the person next to us. Therefore, from time to time during the night's sleep, we all turn to the other side at the same time on command. Only I have it somewhat better, because I am lying at the end of the plank beds and can stretch my knees into the air over the edge of the plank.

Winter is long, dark and freezing cold. In the afternoon at 3 p.m. it is already pitch black, so we stick our pine shavings diagonally into the barrack walls as lighting. Sometimes we lie on our banks in the dark while one of us gives a lecture from his place. - Today it is minus 25°C (-13°F). The windows are iced over, but through a small hole thawed by breathing on them we can see the thermometer mounted outside. Immediately after sunrise it suddenly drops again by several degrees.