The behaviour of people in former times can often not be understood when applying today's standards. Access to the standards of the past, to the way of thinking of the Germans of the war generation, is difficult but necessary in order to arrive at a just judgment. My father's diary fragments provide authentic insights here. He not only tells of the events of war, but also of his accompanying thoughts, which may be representative of a part of society at the time, because his unusual perspective is that of an academic who was not politically involved, but who had a not always own, but very simple, often naive opinion. Parts VI and VII are particularly significant in this regard because they are full of presumptions and generalizations; so, unfortunately, they do not fit into the otherwise very objective presentation. —

My father's reports from the war fascinated me already from my youth on.[1] He knew how to describe grippingly, not only verbally but also in writing, as I discovered when his war diary was ready and I was allowed to read it. In his lifetime he tried in vain to get it published. Only modern means have now allowed to present his work to the public and, I hope, to the social and historical sciences. 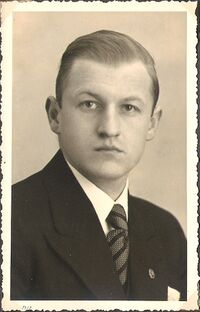 The author Herbert Schrödter 1937 – in the following year, the narration of this diary sets in. 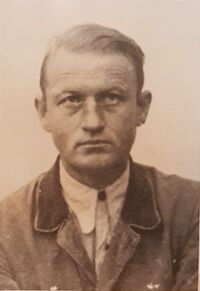 In July 1947 as prisoner of war in Smolensk: Photo for the file card 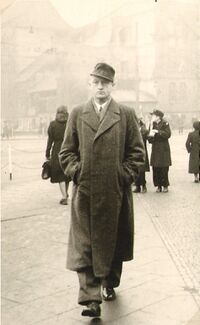 Christmas 1949 back in the homeland; here under way in Münster (Westphalia) 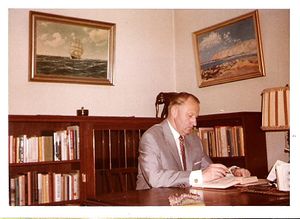 In Summer 1969 in his home office. It looked like that when he was working on the diary. 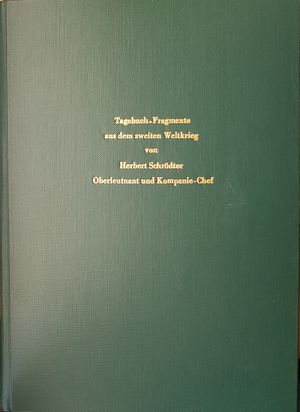 My father Herbert Schrödter was born on 1 May 1910 in Oberschöneweide near Berlin (now a part of Berlin). His father was a teacher, he was also given this fate, after having first desired a job in the fresh air, as a forester for example, and even began a training in the merchant navy which he broke off for various reasons. His diary hereof has already been published on the internet. His career as a high school teacher for French, geography and physical education was interrupted by the war.

Herbert Schrödter went to war in 1940, as a volunteer. At first he was an infantry sergeant (officer candidate) and MG and mortar platoon commander in the occupation force in Poland. During the war he became First Lieutenant and Company Chief of a Weapons Company. He experienced summers in the Ukraine, winters at the Donets, in France, near Nikopol and in Courland, was wounded four times and received the Iron Cross Ist Class and several othe distinctions. Finally he passed 1945–1949 as a Soviet prisoner of war.

It was only with luck that he could continue his career as teacher after return from captivity. A photo album on the Internet documents this stage of life. A liver cancer ended the life of my father who had hardly drunk alcohol, on 8 January 1987. —

Now his war memories are to be published. In addition to their exciting style, they are characterized by detailed, expert descriptions of the landscape, intense yet sober fight scenes and an amazing number of amorous adventures. The number of real combat days is surprisingly low. The war, as it really was, has many more faces than one would expect. My father even found the war not so bad, as he often said – perhaps because he had come out of it safely, he usually added, thoughtfully.

My father does not hold back with his views. He comments on the character of the Germans, the Russian soul and the behavior of the Nazis with a certain naivitey of his own. He thus gives one of the very rare insights into a way of thinking of contemporaries which is incomprehensible to us today because we were educated differently and today have a different knowledge of the history and their connections. So he sees how "stupid" the Nazis behave as occupiers in the Ukraine without realizing that system was behind it. But such insights can help to understand why the Nazi regime could develop like this.

The unfavorable portrayal of the former Soviet Union in this document is subjective and corresponds to the author's perception at the time. This publication does not purport to plead or excuse persons or states, let alone disrupt the peaceful coexistence of peoples. —

The following text is a transcription of the typewritten transcript (see an example) that my father himself made as an author of the handwritten original of which he kept a couple of sample pages. While copying the copy of this transcript as an editor, I felt obliged to preserve the original with all its stylistic characteristics.

The change of the tense between past and present is a controversial stylistic element which was very dear to my father as an author and therefore remains unchanged.

For all its authenticity, however, it seemed to me inevitable to change some little things in the original text. The spelling of villages was adapted if it was wrong according to contemporary sources (the former Russian spelling deviates again strongly from today's Ukrainian from). All these changes are not specially marked.

The headings in the text that differ from the table of contents have been adjusted.

Highlights in the text, if set by the author himself, are bold. Translations, comments and explanations inserted by me as the editor which seemed necessary for the understanding of the text or the larger context, as well as places and dates which are not from the author but supplemented by me on the basis of sources in the course of processing, are always set like this text, in italics, as well as the long forms of several abbreviations. Many concepts, places or persons are no longer as familiar to us today as they were back then; the links to the Internet (mainly to Wikipedia) are therefore not only a document, but above all promote a better understanding, and I hope to have always met the right thing, in case of doubt. For military matters such as the hierarchy of ranks or the organisation of the 257th Infantry Division, I have produced special overviews and attached to the appendix. This gives the reader the opportunity to verify, locate and deepen what he has read as comprehensively as possible.

My father has commented on a number of military, political, and philosophical issues in more detail, repeatedly, or significantly. I compiled these passages in a keyword index. The occurring names of persons and placees as well as abbreviations can be found in other indices, the places also in a separate map. All facts (dates, locations, units, commanders incl. links) are finally summarized in two clear tables as a chronicle.

Although he otherwise had no artistic ambitions, my father did the sketches himself. Subsequent images added by me from foreign sources are marked. All pictures from my father's photo album as well as the sketches from the diary, subsequent additions, maps and documents can be found in a separate photo album. It is not known to me whether my father used maps as he wrote down his diary. I found and inserted some contemporary maps in the album.

My initial thanks go to Mr. Fabian Hentschel who recorded the first 250 pages of the original typewriter text and during this gave important information. My special thanks go to Mrs. Joanna Kovalik for her comprehensive support in the research about Jasło, Mr. Dmitro Torez for information and many old photographs from Slovjansk and Ukraine and Mr. Alexander Rzhavin for important information on Riga and Latvia, furthermore to M. Jean-Pierre Clochon for information about Le Conquet, to the internet team of Smolenskaya Narodnaya Gazeta and the many Facebook members for notes on Smolensk. For invaluable help with the translation I thank Phil Price, Richard Hargreaves and Igor Sharin.

By the way, my father did not want to have his work seen as a diary and therefore chose the title