Man, this supposedly rational creature, is full of prejudices. I came to Galicia in the knowledge that I had been transported to the dirtiest corner of Poland. Undoubtedly, there are more beautiful and cleaner cities and areas, but there are also uglier ones. I am not talking about the stupid theory of the equality of all people, because it is fundamentally wrong. Despite some similarities in the cityscape and in cultural behaviour, there are, on the other hand, fundamental differences and typical peculiarities. The people here are neither better nor worse, neither more beautiful nor uglier than elsewhere. But they are different from us. And this magnificent Carpathian country is a jewel whose spas decorate it like gems. My initial aversion has been overcome. I do not dislike being here, and as joyfully as I go on home leave, I like returning here. Poor good mother, you felt with what a light heart your son left. But was it to Galicia? Or to the house of Piotra Skargi 13?

A few days after my return, I am standing in the street in front of our horse stable when young Mrs Pollak passes by. I approach her about the arranged lessons. Her face is dismissive and I sense that this conversation on the street makes her uncomfortable. We arrange a lesson on the same evening. Assuming she will come to my room, I wait in vain for a long time. Then I decide to go downstairs. Armed with a blue octavo notebook and two Liliput dictionaries, I enter her room. This first lesson subsequently became an almost regular visit. I had to come down every evening and was reproachfully asked the reason for my absence when I was tied up with duty. Despite my reluctance, the family invited me to a family party where I sat among the Polish guests as a German soldier. I did it reluctantly, but I have to say that we – the Poles and I – managed quite well in the situation.

Inconceivable human heart! These Polish women hated me with the unimaginable, abysmal hatred of the Slavs against everything German. And now I recognise from everything they do and say a deep, if restrained, affection. Once, during a lesson, I caught such a tender look from Sofia as a woman has rarely looked at me. Another time she told me that she often found herself thoughtlessly writing "goronca woda"[1] on paper over and over again because she was so moved by the fact that I spoke Polish and pronounced it so droll.

Her sister Marja hardly spoke any German, so we rarely exchanged a few words. She also never forgave us for the death of her fiancé. One evening she went to get potatoes that were stored in the attic next to my room. I heard her rumbling in the dark. therefore, as she was carrying a full bucket down, I put a lit torch to her. She ran angrily to her sister (that's who told me), stamped her foot and declared doggedly that she didn't want to take the lamp from me. She took it anyway and brought it back to my room with a cold "thank you". Later, when I was lying in bed sick with flu, this feisty Amazon brought me a cup of tea with raspberries in bed without being asked. This proud and beautiful girl, whose brother and lover were killed by the Germans, makes this gesture of charity to the hated enemy of her people!

I get the first egg that the newly acquired chickens lay! I am to receive the hitherto concealed radio set for my room. One day Zofia reveals to me with a mischievous smile that the Pole who fled in his day is in Lemberg.[2] Almost daily I receive new evidence of her trust or affection. Only at times the hatred flares up in her again. It shoots up like a flash, abysmal and terrifying, when the conversation touches on German-Polish relations or when she suddenly recognises the Prussian in me. Or it rears up helplessly when she notices it at the touch of my uniform. When she once again gives vent to her anger against the German occupation, I point out to her that if the Germans left, the Russians would come in. She knew that the Russians were far worse than us. Russians and Germans are equally hated in Poland. Nevertheless, she replies to me: "We don't care, first get the Germans out!"

The Poles have a fanatical national pride. It is pure chauvinism. Sofia talks about the often bloody ethnic struggles between Poles and Ukrainians in the Lviv area. There are many Ukrainians living there. She says of one of her friends: "Yes, she is my friend, but unfortunately she is Ukrainian". With how much love she explains to me the differences in character between the hard-working, sober, dogged Warsawians and the amiable, cheerful Lvivians. It makes me think of very similar traits between the Berliners and the Viennese.

Another time she tells me rather bitterly about an experience on the railway. A couple of German soldiers wanted to flirt with a Polish girl. When she gave them the cold shoulder, the Landsers started to indulge in derogatory remarks about the Poles. Sofia understood enough of this to be deeply offended. Even if one does not dramatise such incidents, they remain tactless and unwise. More proof of the thesis that we all too often behave like the elephant in the china shop, not only at this lowest but also at the highest political and diplomatic levels. We Germans are not diplomats.

To my remark about the 1200 Germans murdered in Poznan[3], Sofia says she doesn't believe that. The Poles wouldn't do such a thing. She is too much a woman and a Pole to be objective. In this respect, we Germans are probably more honest with our objectivity, even against ourselves, whereby we then even foul our own nest in connection with our tendency to fall into the extreme. A Pole would never do that, nor would any other European. The Austrians still have sympathies with Sofia, the Reich Germans do not and the Prussians certainly not. 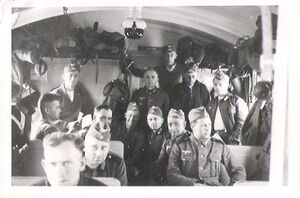 This photo could well be from such a military vacationers train.

One morning I enter the orderly room when the Spieß exclaims at the sight of me: "My goodness, I almost forgot: You are to drive a MUZ (military vacationers train) to Berlin as a transport leader! The train leaves Reichshof (Rzeszów) at 11 am. You have to leave at 10 o'clock from the local station." I look at my watch. It is 9 o'clock. Now everything goes like lightning. Back to the quarters, change, pack my suitcase. Earlier I had already ordered the fodderer to hitch up a sledge and Sergeant Mielenz to rush to the market to buy a goose and bring it straight to the station. As I walk back to the barn, Jupp Zimmermann is already sitting in the sledge, the line ready to go in his hands. As I get in, the horses are already pulling and the light sledge flies through the streets of the town. As we pull up at the station, Sergeant Mielenz is already there on his bicycle, with the goose under his arm moments ago slaughtered, still warmly packed. In any case, it went like clockwork. I say goodbye with thanks and appreciation and disappear into the station building.

In Reichshof (the Germanised Rzeszów) I report to the station officer, an elderly, friendly captain who gives me the necessary instructions. All I have to do is check the tickets and leave passes and find out how many vacationers are on the train. For this I have two more soldiers to help me. We are assigned a compartment in the upholstered class (2nd class) as a service compartment. The transport goes without incident. The military vacationers train arrives in Berlin on Friday evening. On Sunday evening I have to take the same train back. So that means two days' leave with my parents, a short visit to Lotte, and then it was back to Jasło.

The goose had survived the journey with difficulty. The freshly slaughtered, still warm animal had lain in the luggage net of the heated compartment during the entire journey. When my mother gutted it - the intestines were still inside - it already was a bit "high". I could have hung the goose out of the window during the journey, as was customary, but it was often stolen.

The service goes on as usual. We often practise in the freezing cold on the hills on the outskirts of Jasło. Then I look down on my quarters from the heights and look forward to my warm room and the lesson with Sofia.

Every six weeks, I have to act as duty officer. During the night, I have to check all the guards and sentries in the area around important military buildings. Wearing my steel helmet and coat with my pistol strapped on, I then make my nightly rounds, walking across the lonely market square illuminated by the pale moonlight, through the quiet, deserted streets, and only the walls of the houses reflect the echo of my footsteps.

A few weeks later it's again my turn to go on leave. Sofia and Marja ask me to bring them some things from Berlin that have not been available in Jasło for a long time: Skin cream, perfume, a thermos flask and Andersen's fairy tales.