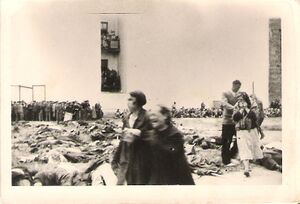 30.06.1941 in the courtyard of the Łącki prison[2] in Lemberg: Relatives identify those murdered by the Russians[3]

We take a short break in Lemberg. I quickly have my blisters treated in a hospital on the outskirts of the city[4]. A Jewish doctor willingly lances them for me, and a sister bandages me. Later, on our way into the city, we come to the prison. There is tremendous excitement here. Shortly before our arrival a terrible crime was discovered. The German administration had the prison cellars opened, which were suspiciously bricked up. There was a ghastly sight: The cellar vaults are filled to the ceiling with corpses, piled on top of each other like kippers in a barrel. When we arrived, they were just about to bring the bodies into the prison yard to have them identified. News of the discovery passed through the city like wildfire, and many Ukrainians rushed here. They were relatives of missing people who had been arrested by the Soviet occupational forces and were never seen again. Now they walk in the prison yard past long rows of corpses, often mutilated beyond recognition, and look for their loved ones, wailing and crying with fearful, horrified eyes (photo). Survivors scream when a loved one is found, others behaving like madmen in pain. The German police feel compelled to block access to the courtyard. Weeping women are now standing in the street in front of the entrance gate, pleading for admission with their hands raised. Others hold their headscarves in front of their faces and cry heartbreakingly. Some Luftwaffe soldiers stand between them.

The murdered were apparently mostly Ukrainians. This is why the Ukrainian population has been seized by excessive rage against the Bolsheviks and, as they say, their Jewish accomplices. But since the Bolsheviks have left, all the anger and indignation is concentrated on the Jews. The ancient hatred of Jews breaks out again. Small and large groups of Ukrainians, armed with clubs, go through the streets of the city and drag all the Jews they can pick up, pushing and beating them towards prison. Another group has just arrived, driving a Jew before them. The column comes to a halt in front of the prison gate. A very tall Ukrainian grabs a board, swings it over his head with both hands and smashes it over the Jew's skull. The man sinks to his knees, but immediately stands upright again. He is pale, but admirably calm. Then they push him through the gate. The manner in which the Jews endured this catastrophe was truly admirable. Only one girl, aged about 17, lost her composure. She threw herself at the chest of a German soldier, wrapped her arms around his neck and shouted: "Help me, help me, I am innocent". The soldier stood hesitantly, embarrassed and didn't say a word; they had already torn the girl away.

Many Jews work in the cellars, only Jews carry the mutilated [corpses] into the courtyard. The vaults are already half empty, but the heaps are still as high as a human being. The corpses have already begun to decay, for under the feet of the Jews who move around these piles, it is as if you're walking through mud. The broiling heat and the smell make staying down there hellish torture. The supervising German policemen wear gas masks.

We leave the place of horror, fall in and march off. The road is very busy. People are restless. Excitement, horror, anger and despair lie in the air like some explosive tension. A civilian stands at the roadside and claps his hands ostentatiously at the sight of us. After a few hundred metres we turn left into a side street. Suddenly the scene changes. On the left side of the street there is a park, on the right side there is a row of houses. On the balcony on the first floor of a house an elderly gentleman sits in a deck chair and reads his newspaper calmly. On the second floor of the next house, two blonde teenage girls stand on the balcony in flowery summer dresses and wave happily to us. What a contrast! Still filled with the gruesome overabundance of inhuman brutality, I now stare at this image of peace. A few hundred metres further on, just around the street corner, horror hangs over the city, raging hatred and death. And here is peace, tranquility and cheerfulness! How close life and death, love and hate, peace and turmoil, war and peace live together!