Meanwhile[1], the advance party has been disbanded again and we are back on less dangerous duty.[2] There we suddenly encounter retreating baggage trains. Our division marching ahead of us had suddenly encountered strong Soviet resistance at Krasno Pawlowka. It attacked out of movement, but came under such fierce defensive fire that it stalled with heavy casualties. In our stormy and all too careless pursuit, we literally ran into a quickly built up Red defensive front here.

Just as we were moving into the village from the northwest, where we encountered the baggage train, the Reds launched a massive fire attack on the southern part of the village. Flames and billowing clouds of smoke rose to the sky in a broad front. The baggage trains stationed here also suffered sensitive casualties and retreated to the next village. We stay and are quartered at the northern edge of the village. (I have forgotten the name of the village. It was roughly to the north or northwest of Krasnopavlovka.[3]) The farmhouses stand on a wide, sandy village road that leads into the open field after about a hundred metres. We had put down our luggage and immediately went back to the village road to continue following the course of the fighting. Above us two light Soviet bombers are passing.[4] They are flying back to the front. Suddenly, a German Me 109 shoots up from behind the two-ship, gets so close to the last bomber that it looks as if it is about to ram it, but at the last moment turns in an elegant arc and disappears. Suddenly the red bomber is on fire and plunges down burning. The Russians standing with us on the village street burst into shouts of joy. A girl claps her hands laughing. 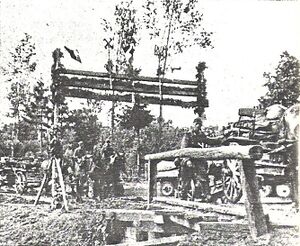 With such and similar triumphal arches, which the villagers had carpentered, we were welcomed as liberators and joyfully greeted by the inhabitants in many Ukrainian villages.

I always say Russians. But we are still in Ukraine, and the Ukrainians are not particularly friendly to the Great Russians. The Ukrainians want their political, ethnic and cultural freedom, but the Great Russians have always known how to prevent it. Now the Ukrainians place their great hopes in us. Hence the large wooden triumphal arches decorated with garlands at the entrances to the villages, with which we were greeted in many villages in the first days of the advance. It was a momentous mistake of Hitler's to have disappointed this hope of the Ukrainians. It was a huge stupidity.

Some time ago, when we happened to be in the same place with our division staff, I had the opportunity to attend a church service. Afterwards I went for a walk with the division chaplain. During the conversation I said that one should not support this anti-Christian Nazi regime. The priest, however, still considered the fight for an anti-Christian fatherland to be the lesser evil compared to an equally anti-Christian and, moreover, foreign Bolshevism. He was certainly right about that.

Towards evening we are on the village road again, because east of the village suddenly the noise of battle started. Four captured Soviet soldiers are coming from that direction. They are without guards and are pushing a severely wounded comrade on a cart in front of them. As the night progresses, the noise of battle from the east comes closer and closer. Soon we clearly hear the infantry fire and distinguish between our own and enemy machine guns. A volley from the Russian Stalin's organ pelts down and lights up the night with its spraying phosphorus sparks, which shoot up radially as the rockets explode and rain down to earth in a fiery arc. The front is still about four kilometers away on this side. So the Russian is attacking and obviously wants to take the village. We are lying back here with a bunch of comrades, armed only with pistols, in complete uncertainty about the situation, in unknown terrain and in the middle of the night. What we hear is only the horror news of wounded soldiers going back alone. Of course, you can't believe everything such people say. They are still in shock, want to act important or to cover up their desertion. But an uneasy feeling remains, and the approach of the front is unmistakable. It is worse to have to accept all this without doing anything than to stand in a position in front of the enemy with a weapon in your hand and fight. I feel uneasy, and that night I cursed the war for the first time.