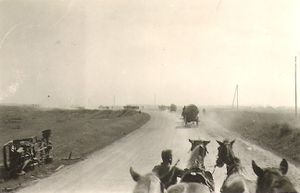 A weapons company in Fliegermarschtiefe[4] 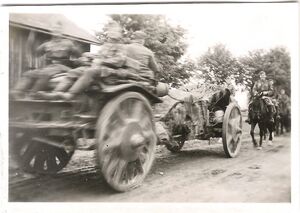 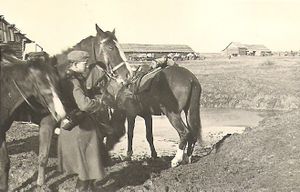 Rest also for the horses[5]

The daily routine of the advance was basically always the same. In the morning, the individual battalions arrive at their starting position at the appointed time and then thread their way into the regiment's marching column in a similarly-appointed order. The order changes. The marching order, the distances - for example the spacing of the column in the threat of an air attack (Fliegermarschtiefe) - depend on the military situation. The daily marching distance depends on the situation at the front, but also on the terrain and the weather. For us it is currently 25 to 30 kilometres. In the beginning regulations were strictly observed. Later on, expediency was decisive. Initially, the panzer and motorised divisions pushed forward so rapidly that the infantry divisions had tremendous trouble following them. Tremendous marches were demanded of us and to fulfil them the Landser tried all possible means and ways, which were tolerated even if they did not always succeed. Then some of comrades bought hand carts and pram for their baggage and soon noticed that carrying them was more practical. The man I was billeted with in Męcinka, the Oberfeldwebel, takes a bicycle from a civilian. The Jew gives it to him with the words: "Take it in God's name". That was out-and-out theft, of course. The same Oberfeldwebel had also secretly let the men of his platoon take turns on the baggage vehicles even though it was forbidden. He made himself popular with the men this way, but he doubled the burden on his horses. The carts (Heeresfahrzeug 1 (HF 1), the standard cart of the Wehrmacht) were overloaded already and on top of that the animals were asked to do too much in the hilly terrain. Our heavy, very solidly-built carts were unsuitable for the terrain in the east. In addition, many were certainly loaded more than the permitted 15 hundredweight per team of horses.

When the first signs of fatigue became noticeable in our horses, all riders had to give up their horses so that they could be harnessed with the draught horses. Since I don't have a horse anymore, I often climbed on the trucks of the motorised columns overtaking us and drove several kilometres ahead to wait at a prominent point for our following column. In this way I managed to advance several kilometres as a free rider. These were lighter moments in the hot, exhausting period of advance. But it goes on and on, day after day, week after week. These are hard weeks, but the mood is good. We are advancing!

The day's objective was usually some place, usually a village, occasionally a town. At the objective, the long marching column dissolved into the individual units, companies, platoons and squads[6], which then moved into their pre-determined quarters. The vehicles were dispersed to yards, under trees or behind houses. The drivers stretched out and fed the horses. The men deposited their baggage in the lodgings, and then the most beautiful part of the day began. Water was scooped from the wells, and then the Landsers stood with their naked upper bodies bent over the buckets, snorting and splashing to rinse off the dust from the country road. Refreshed and cooled, they began to search the surroundings for food, bread, milk, eggs or chickens. Unfortunately, often in an indecent and unreasonable way. I saw how carts had barely been driven into a yard before sticks or hatchets were flying at chickens. Sadly, I have to admit that in many villages which were occupied by German troops there was not a single chicken left after a short time, because Landsers had killed everything in their lust for food. So there were no more eggs. You simply could not tell these idiots that they could have had eggs all the time if they had only spared a chicken just once.

••• im Original weiter ohne Zeilenumbruch •••However, in order to excuse our Landsers, I must mention that before we invaded, the Russians were in these areas, and they helped themselves just as generously. This is the only way I can explain why the population is still friendly to us despite such ugly incidents.